My Path To Reptile Rescue

What started my entering the world of reptile rescue was my 7 year experience in working in the pet shop industry in late 1989, shortly after graduating high school. I was quickly promoted to managing the care for the reptile/amphibian department & specializing in general animal/pet care.

Becoming involved with what goes on behind the scenes in pet stores, I realized very quickly what I didn’t want to do anymore…to purchase any of my pets (only bought my bird…that’s another story). Instead I wanted to get involved in reptile rescue & adoption. I did not want to support the industry & all those involved in it. It’s an ugly & unfortunately “profit first” industry.

So, during those 7 years I had, accidentally, built a reputation for consulting pet guardians on pet care & where to go if an animal needed rescue &/or to be adopted. Personally, I ended up with 31 pets at one time. Rest assured I wasn’t a hoarder, quite the opposite. The Crtrs “beds” were cleaned on a daily basis & most had the run of my apartment. I gave my Crtrs the best care I could possibly give, many of those Crtrs were reptiles. People buy, even adopt these tough, but delicate, fragile, unpredictable, some carnivorous animals without taking the time to do their homework to research all the information needed to properly care for them.

Among the many species of reptiles I rescued & adopted were iguanas. I fell in love with their personalities, prehistoric looks & immensely tough, sharp armor…yes sharp. Most of my iggies were Green Iguanas (Iguana iguana), one of them had beautiful baby blue coloring on its back. I also had a feisty Black Spiny Tailed Iguana (Ctenosaura similis).

Some had disabilities, some were near death & brought back to insanity. For sure, all kept me on my tip toes. Always great to come home to them, even the ones with attitudes. I loved them all very much.

There was a time, though, I really wanted to adopt a large, adult male Green Iguana with orange colors. Most of my adopted iggies were quite young & different shades of green. For different reasons, my wish didn’t happen. I did reach a point where I needed to slow down in adopting Crtrs for a while, but continued to rescue.

Starting my life over in North County San Diego, now in my late 30s, I get a call from my best friend from LA who worked at one of those pet shops with me. There, she was my partner in crime in taking care of the reptiles & she’s now an awesome veterinarian technician.

She gave me news I’ve forgotten all about…”Wanna adopt a large, green male iguana with orange markings?” I nearly fainted! At this time I was living in a 1 bedroom apartment w/ a patio. My roommates were my adopted, lazy, chubby cat & my bird so I was afraid I didn’t have the room or maybe, more so, that I didn’t have the energy to deal with a large lizard knocking things down in my place. It’s been a long time…“Oh, it can’t climb. He’s crippled.” Holy crap! I think I remember my heart thumping so hard & of course, I gave my friend a “Hellz Yeh Man!!!”

On my way to meet & pick up my new baby boy with 2 girlfriends that seemed more excited than me since this would be their first time ever seeing a lizard so large up front, I thought the time couldn’t go any slower. Then when we reached our destination, I met my handsome boy. I swear I was stunned. I couldn’t believe he was mine. He was sunbathing so his green coloring turned completely orange, mouth wide open! I can’t begin to tell you how giddy I was. Joy joy joy!!!

Since then, my spoiled rotten child had not only the run of our homes, including his own bedroom which he later shared with his uncle for a year, he also gained 3 new siblings, a brave daddy that loved him so much (mind you he never had experience with reptiles), & grandparents that showered him with gifts like building him his outdoor, forest-styled sanctuary which included a large tent filled with tons of blankets, towels (for accidents), & a full sized mattress heat pad accompanied with a large bath tub.

He shared his drinking bowl with his tiny Crtr neighbors such as wasps, bees, slugs & pill bugs. Mommy cleaned up a lot. This prehistoric beast was simply spoiled. He was not an affectionate iggy, in fact, he loathed at my presence each day…”Oh no, I don’t want kisses” “Aw jeez, I’m not a stuffed animal! Put me down! Fear me woman!”… “Yes, I shit in the tent, but don’t move me from this mud of stinky warmth. Noooo, not the shower!!!” 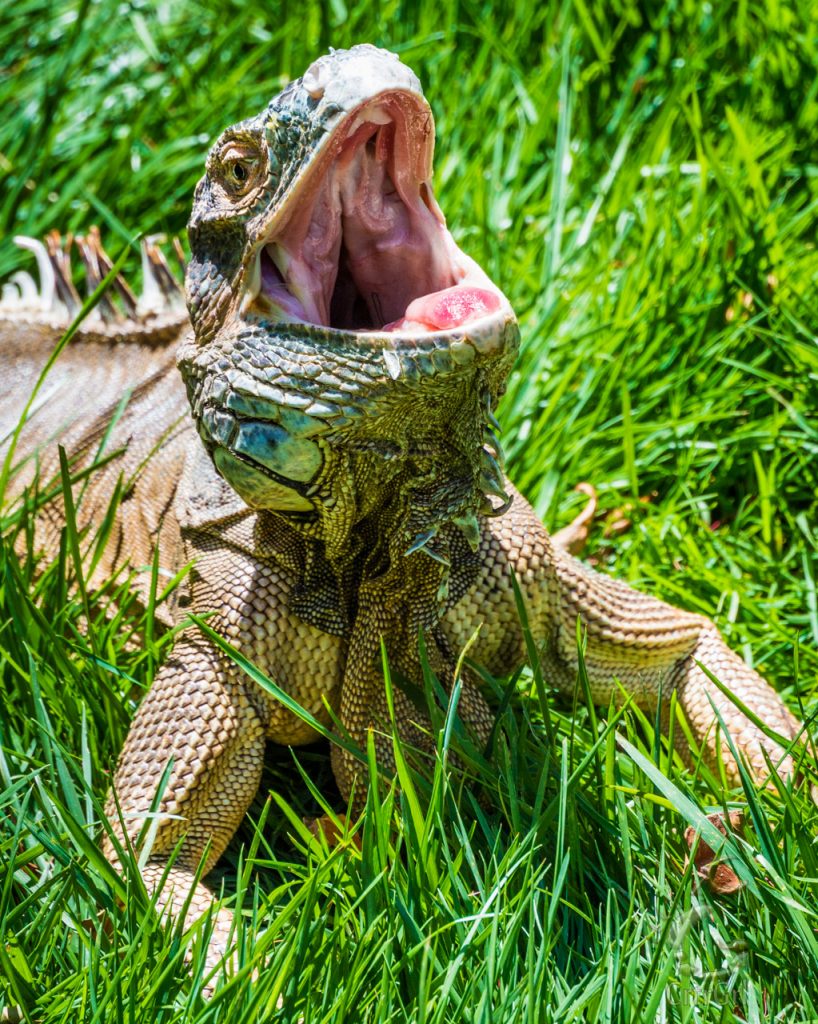 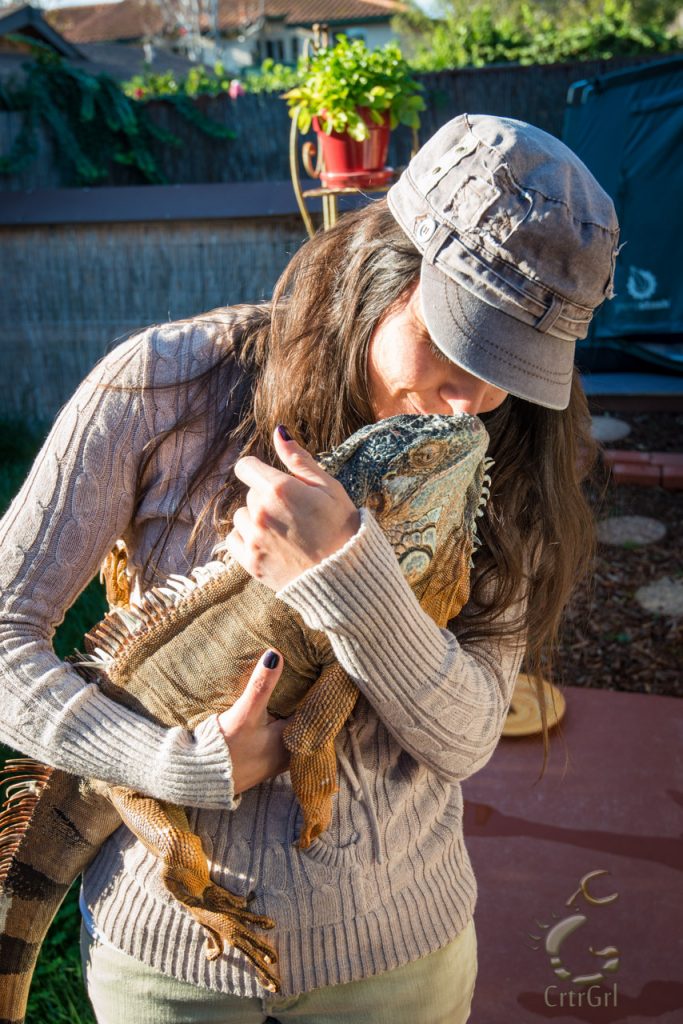 There were many, many more ways he hated me, but there were also those moments he just let me caress his cheeks (aka jowls) until he fell asleep, stayed on my lap while watching T.V., even did some yoga moves with me or just lay around while I worked on the computer or did some house cleaning.

Those times I felt maybe he likes me a little. He wanted to remain a wild beast. He was never aware of his disability. Hell no! He was mighty! He was king! He let us know this on a daily basis via be-bopping his head furiously, staring with his fiercest eyes which would make Tyra Banks applaud & weep so proudly, & even sometimes opening his mouth so wide that could lower a pelican’s self-esteem in an instant.

Maybe he could intimidate other humans, but not me. I just fell in love with him each time he was, what I used to say to him, “Agro”. I would always respond to his agro ways with, “I know, I know. You are king. You are the man. I’m your slave.” 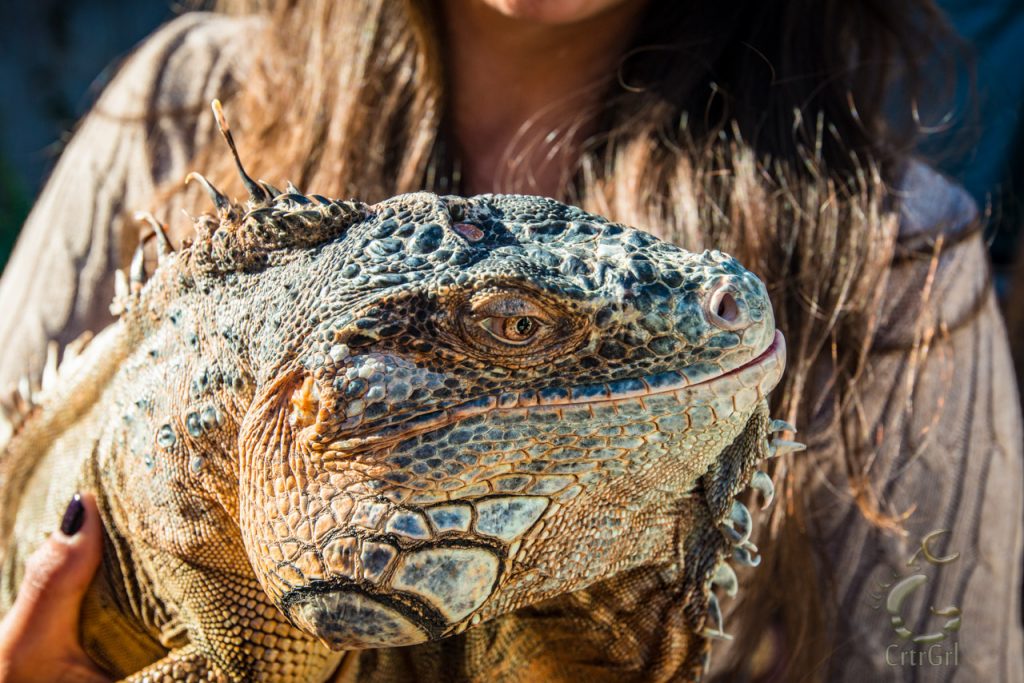 Never Ready To Be Awakened From My Dream Come True

On 1/25/16, my handsome boy, which was the nickname I used most when I spoke to him, passed away peacefully in his blanketed, heated tent surrounded by the overgrown mini-rainforest with his siblings sitting around him, daddy on the phone & his mommy holding his hand. I couldn’t ask for a better way to say goodbye. It was when I gave him a kiss on his head telling him it’s from daddy that I realized he had left us. My grumpy ol’ man was approximately 17 years old & he gave me the most memorable, wonderful, stinky, giddy, messy, scary, laughable, precious 7 years I’ll hold so dear for the rest of my life. He was & always will be my dream come true.

RIP Chet. We will always adore & miss you greatly!